Do you deal with a ton of paper works?

That kind of workload wherein people sends you a bunch of paper works and you had to encode all the information again for corrections or any renditions?

If so, you are in for a treat!

I was in the same predicament wherein I had to redo a lot of documents and may have to retype it. It was a stressful experience; if only I’ve known a good Optical Character Recognition software that time, I would’ve gotten out of that situation in a much smoother way.

Let me introduce this amazing technology that I just found out recently and the wonders of a software called Nuance OmniPage.

What is Optical Character Recognition Technology?

It is an advanced technology that allows users to convert files such as PDF files or a scanned document into a format that could be edited. The users would then be able to add contents or input corrections into the document

Scanning does not allow users to edit the content of a brochure, magazine or perhaps any legal PDF documents. For users to be able to make corrections or edit a document, we need the OCR technology to identify the elements in the document – each and every letter, then make them words and put them into sentences; just like how it is in the document itself but in a format wherein users can make renditions to it.

Such an awesome technology exists and I am sure that most people, if they know that it exists, would die to have it!

Intrigued as I am, I checked on a software that that offers such technology to the market; and that software is Omnipage, a software developed by Nuance.

Let me show you my experience when trying out Nuance Omnipage.

Most people don’t like to deal with “new technology” due to how hard it is to adapt to it or just people too lazy to learn new things. Nuance made a hard statement that learning new technology isn’t that hard.

By designing the Omnipage Launchpad! 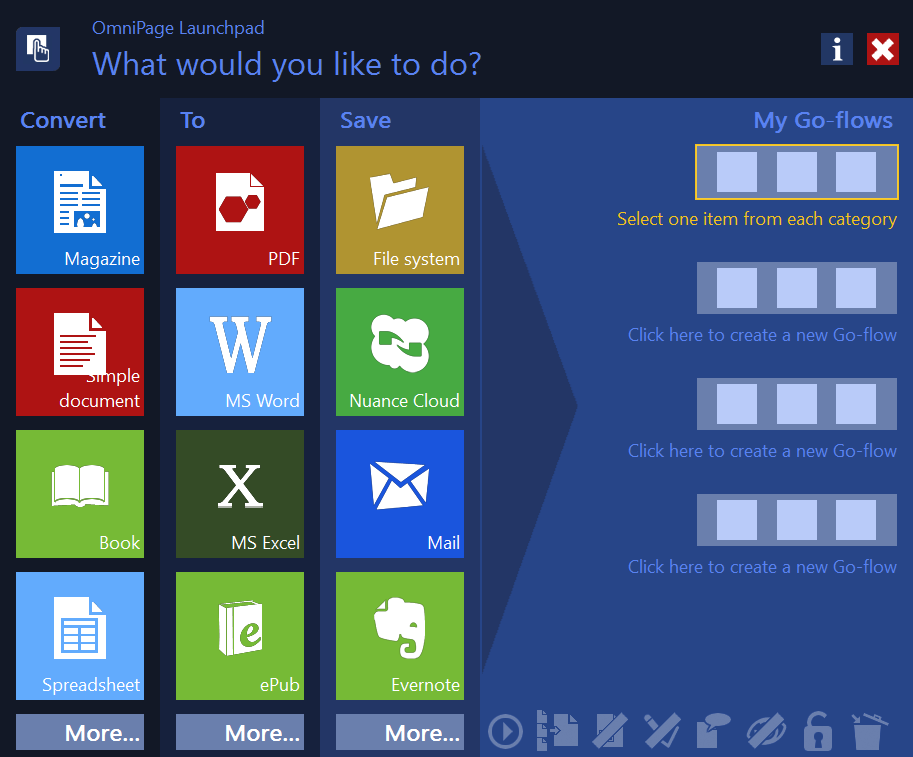 Omnipage Launchpad is mostly where you will do everything; converting your files into an editable format and saving it into a designated folder.

For starters, you simply have to create your Go-flow lists first. On the right side of the Launchpad, you would see four available Go-flow spots. You select one and then customize your Go-flow. May it be you want to convert a magazine into an MS Word file or a simple document into a PDF file, then you have to choose what you would like to do with the output; if you’d like it to be saved to your computer File System or if you’d like it to be attached to an email, you just have to click these options on the list.

To start a project, you just have to simply select the Go-flow you’d like to perform and start it. Once it starts, it would then ask for the file that you would like to be processed.  Nuance Omnipage would then process the file just as how your Go-flow has been configured.

CLICK HERE TO GET SECRET COUPON FOR NUANCE OMNIPAGE

The small icons on the lower right of the Launchpad allow users to configure the behavior of the software, if a user would like to:

The whole software has been over-simplified by Nuance that it could already explain itself on how it works. Users just have to basically click on the desired tasks on the Launchpad.

One of Omnipage Ultimate's features would be DocuDirect; it is a software that you could install on your network server or a shared computer that would act as a rule for your whole network. It is fully customization and it is where you could set where the converted files would be sent; whether it is to a single destination, multiple destinations or on-demand to anyone, anywhere.

How did it go for me trying Nuance Omnipage?

I could express my experience in one word: AMAZING!

Omnipage’s OCR technology is really new to me but it was not hard for me to love the software. Thanks to Nuance’s development team who designed the Omnipage Launchpad to be as simple as ever. Being able to perform a task that could take days in just a matter of a few seconds by doing less than ten mouse clicks just blows me!

Personally, if someone introduces me to a new software that has tons of buttons and functions, I’d easily be discouraged right there and then. The advanced technology these days would be sufficient for developers to design a software that would perform the tasks the users would like without all the hassle.

And on this, Nuance has not failed their audience.

OCR technology is one thing, but judging how fast Omnipage does its tasks would only mean one thing: this if, if not the best, one of the best OCR software there is(together with a very few competitors).

The output of the software is just as great as it could be. 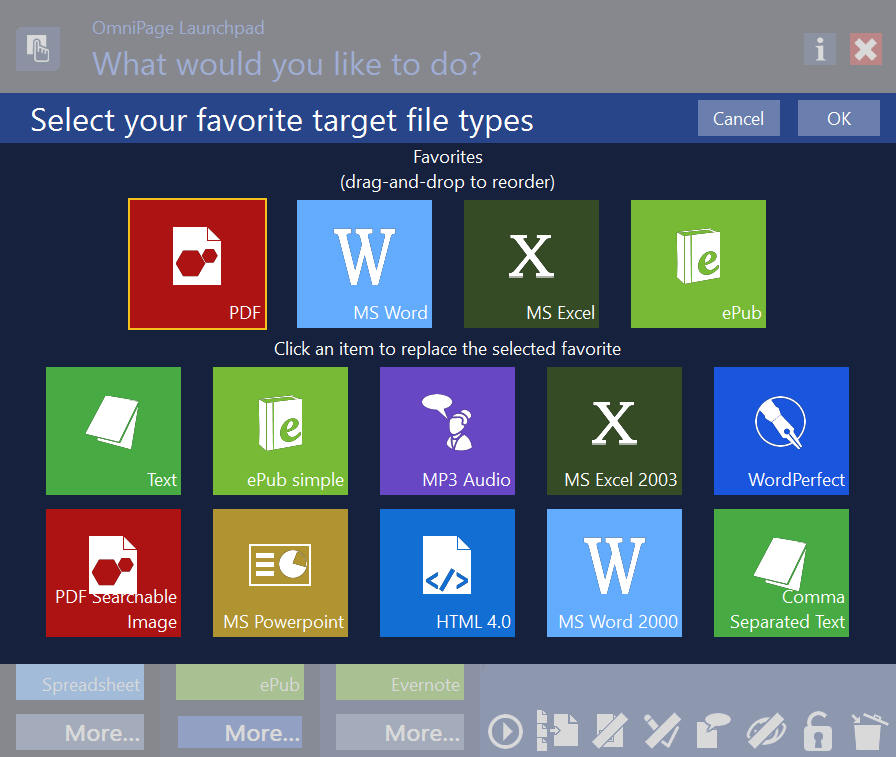 Nuance Omnipage offers users a variety of options on what they can do with their document. Some users would like to immediately have it as a Powerpoint presentation, some into an audio file for them to just listen to the document instead of reading it, some would like it to be converted into an HTML file or a comma separated text. Nuance knows these things and they have designed Omnipage to suffice their user’s needs!

The only downside I see with it is just how my computer slowed down its boot-up process after installing the software. After installing it on my computer, it added a few software into my startup items. Usually my computer starts up within 25-30 seconds. But after I installed Omnipage, it greatly increased into 45-60 seconds.

One could always disable the startup items.

For more information on how to do that, you can click on the links below.

I have done a little bit of checking on how the software works myself and most of the reviewers are extremely satisfied, just like me.

I routinely process tens of thousands of scanned documents.  Nuance Communication's Omnipage Professional 18 is my trusted source for delivering the most accurate searchable PDF files in the least amount of time.  I rely on Nuance Communication's OCR technology, with its years of research and development experience, to provide cutting edge results.  If you are looking for a product that will truly make your job easier and more productive, then you need Omnipage Professional 18.

Omnipage Professional 18 remains one of the most capable OCR programs on the planet, both for its core task of text recognition and its long list of related capabilities.

Omnipage 18 Standard is among the best OCR software. Its performance and features exceed that of its competitors. We were impressed with its exceptional accuracy, automatic language detection and wide array of application support. Omnipage's 3D correction function provides the most accurate OCR conversion results, even for low-resolution images. If you have frequent OCR needs or have a large document conversion project lingering in your office, we wholeheartedly recommend Omnipage.

I have been using OmniPage for many years, but with this slick new interface I feel I am accessing more of the program's potential than ever before. It's like having all the power of OmniPage Ultimate in a multi-tool that I can keep laid out on my desktop for ready use.

Note: Performance and speed will be enhanced if your computer's processor, memory, and available disk space exceed minimum requirements. This is especially true when converting very large color PDF files.

Note: Performance and speed will be enhanced if your computer's processor, memory, and available disk space exceed minimum requirements. This is especially true when converting very large color PDF files.

The next big question is, how much is this software?

Judging by its features, reliability and how much time you’d be able to save when using this software, it is really going to cost a little bit bigger than other softwares.

Omnipage, as I have mentioned from the very beginning, has two versions: Standard and Ultimate.

The Standard version is a stand-alone OCR software. Which means its only function is to convert different types of documents into an editable format. Originally, you could get this version of Omnipage for $149.99.

Note: The standard version does not have the Launchpad, but since it is only a single software, it isn’t that hard to perform tasks with it.

The Ultimate version is a pack of every essential tools a person who deals with tons of paper works needs. Starting with the main software, the standard OCR software, Nuance packed in a few more softwares such as DocuDirect that empowers the users when it comes to document routing. And also, the Text-to-Speech module that reads back scanned text to you aloud as an aid in proofreading. You could get this version, originally, for $499.99.

Is it worth it?

Time is the only variable in this universe that nobody could buy. We could only make the best of each second. Nuance Omnipage’s goal is to help people save a lot of time. Instead of retyping tons of documents, using Omnipage would finish it in a matter of seconds!

So if this software would ask me to throw in a hundred dollars, I’d still take it with a big smile on my face.

OCR technology designed closely to perfection; that is Nuance Omnipage. Learning how to use it was never a challenge for me when I was trying it out, thanks to their Launchpad. If you are an advanced user and is quite particular with how you setup your OCR, I am very confident that you will find all the functions you need within the actual Omnipage softwares.

Don’t be afraid to explore, their support team has a great reputation; they will surely help you in your times of need.

Mark everything with a 5/5; may it be the features and its price.

You will never regret getting Nuance Omnipage, the best OCR software.

CLICK HERE TO TAKE ADVANTAGE OF A SPECIAL COUPON
9.3 Total Score
Features:
9.0
Ease Of Use:
9.3
Price:
9.6
PROS
CONS
User Rating: Be the first one!
SaveSavedRemoved 0

ABBYY FineReader Review from Real User – Is it the best OCR software? and How to Use it?