Emsisoft Anti Malware : Read this Review and Demo Before You Buy It

If you’re using windows you’ve had to deal with some sort of malware at some point. Be it ransomware, annoying toolbars, or even trojans that get loaded onto your computer. It’s in those moments where you wish you had a line of defense in place. There’s certainly no shortage of anti-malware apps out there but many try to up sell you on upgrades and many versions with complex user interfaces.

A simple to use and no bloat scanner and protection for windows based PC’s. This software provides it all in one interface; allowing anyone, regardless of technical experience, to protect and ensure your machine is safe.

Get rid of those annoying toolbars in your browsers you never opted or were tricked into installing. Ensure your data and valuable information is safe and secure. Most of all have peace of mind from future attacks that Emsisoft is installed and ready to protect your PC.

To define anti-malware we must first define what malware is.

A malware is a software that is intended to damage or disable a computer. This can be installed without your knowledge or packaged into something that is seemingly harmless. An e-mail, link, or some sort of download for example.

In basic terms Emsisoft Anti Malware helps get rid of all those bad things on the web you always hear about: viruses, bots, spyware, key loggers and so on; all these are detectable with this software and more importantly it helps protect you from future attacks. 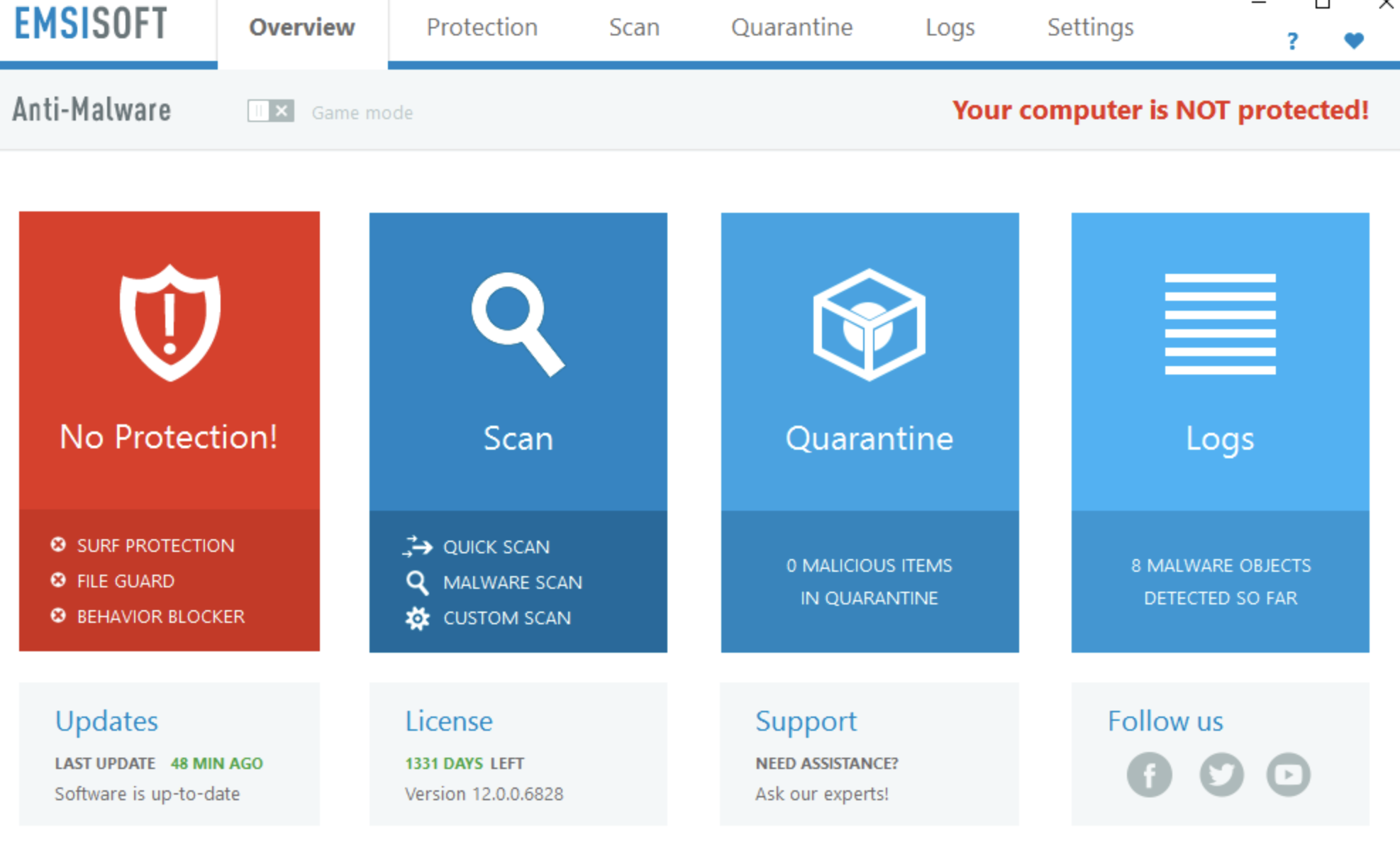 Why is it called an anti-malware software instead of anti-virus?

As research shows below 5% of users are typically infected by just a virus. Most are infected rather by forms of malware.

It works in multiple ways first and foremost is the protection aspect of the app. It does this by protecting your files and browsing habits, alerting you of suspicious downloads and preventing you from accessing known troubled sites. It also monitors background apps to ensure that nothing is accessing files it shouldn’t. Essentially you have to do nothing but let the app run and let it do all the hard work. In the simplest terms it protects you and your files.

-Surf Protection ( Protects you while your surfing the net and prevents you from accessing known troubled websites)
-Real-time File Guard ( Checks all downloaded and modified files to ensure safety and noting is infected with viruses, trojans, etc.
-Behavior monitor ( Looks at app activity in the background and ensures that no suspicious activity is ongoing or data is being sent)
-Virus Scan
-Quarantine section ( Allows you to contain all viruses or suspicious files)
-Quick Scan ( Scans surface files not everything on your drive)
-Malware Scan (Scans deeper structures of your disk including system files)
-Custom Scan (Designate exactly what files, folders, and drive you want scanned) 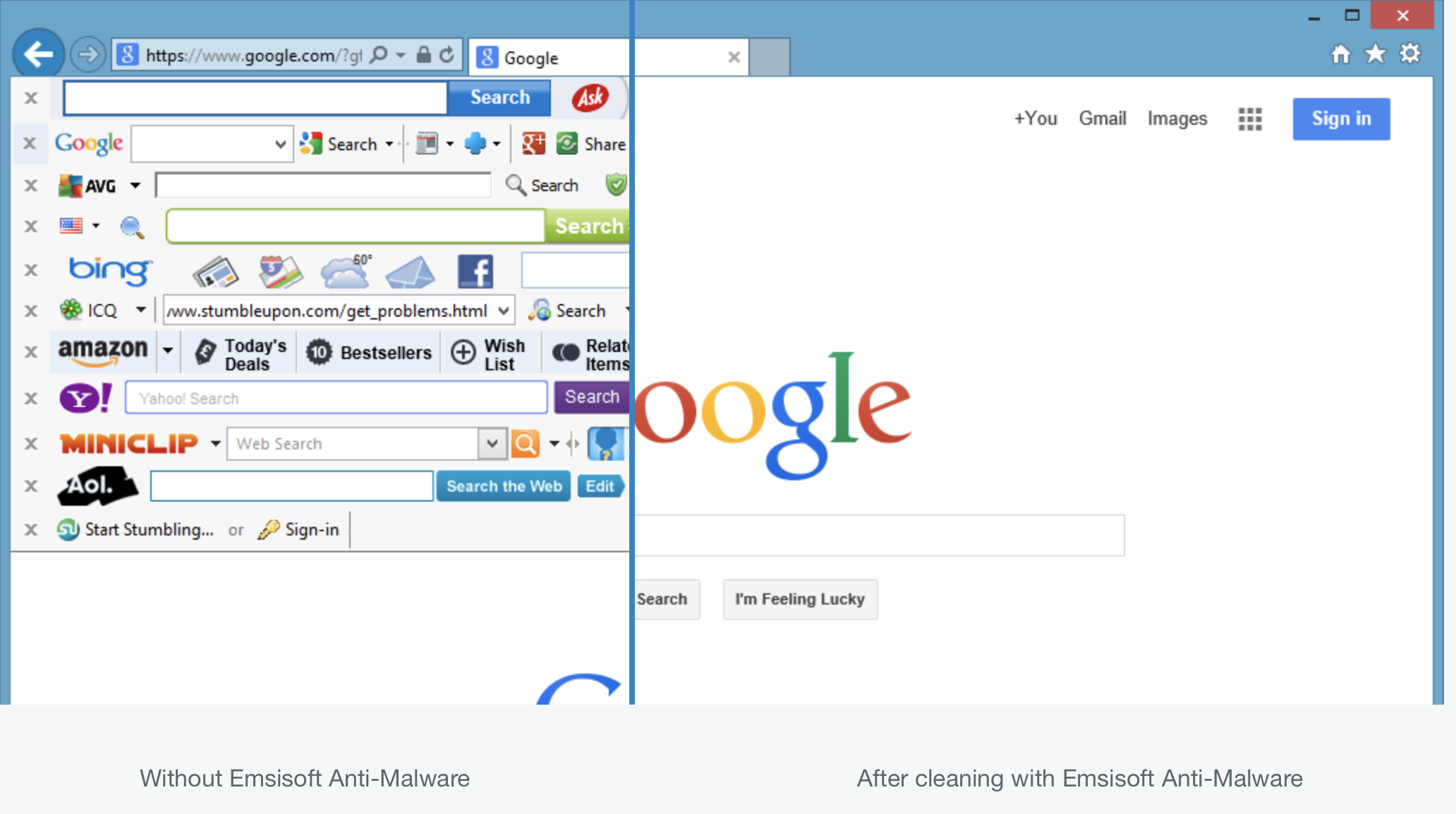 My Experience with Emsisoft Anti Malware

I’ve used all sorts of anti-malware and virus protection software and have to say that this software really nailed the interface department compared to many others. It focuses on a non-bloated interface that allows users to get to what they want. No fancy effects or graphics just a useful set of tools that are clearly labeled.

One big focus of Emsisoft is its ability to clean PUP’s or potentially unwanted programs. These are typically toolbars you see in your browser that you have no idea how they got there. Only to find out that some other software you installed may have hidden an option to download said toolbar.

This is not only annoying but a hassle to remove.

I can confidently say that Emsisoft anti malware quickly found some test toolbars I installed and flag them as potentially unwanted. From there I was able to quickly remove and cleanse my browser.

CLICK HERE TO GET THE HOME VERSION OF EMSISOFT

CLICK HERE TO GET THE BUSINESS VERSION OF EMSISOFT

Another great feature I enjoyed as a gamer. When playing computer games, Game Mode can be toggled on so that the anti-malware app isn’t running demanding scans or intense background processes that would hinder network and gaming performance.

It’s a nice added feature for someone like me.

What I enjoyed most about the app was the all-in-one experience. No need to install additional real time protection apps or file protection software as Emsisoft anti malware handled it all.

Don’t get me wrong…

They do sell additional tools but as far as protection and security software goes the anti-malware is a great tool to have to protect against basic and advanced threats. It’s the small things in the app that made it enjoyable from the gaming mode to the small outbreak alerts that notify you of major security news and outbreaks ongoing.

So if there’s a big virus or what have you, you’re made aware and alerted. Going the extra mile to inform the customer is what really sold me on the app.

Also for peace of mind sake it is nice to see that the overall company of Emsisoft has some of the least compromised systems showcased in a real-world protection test conducted by AV-Comparatives.

What this means is they had some of the least level of intrusions on their security systems compared to some big name competitors out there.  Easy to setup and use.

What Makes It Better Compared to the Competition?

The fact that it houses some of the least level of intrusions to their system is one remarkable award it has above others but beyond that I found an assortment of features that stood out.

One big key feature is the two engine scanner.

While some competitors focus on mainstream threats, only Emsisoft anti malware scanner runs two scanner based technologies. One looks for big threats while the other focuses on unwanted programs or things that may be running the background and affecting overall system performance and security. So it maximizes what it scans while also maximizing efficiency and ensuring the least resources are used on your machine. The worst is when you have anti-malware software that throttles your CPU and machine while running it. 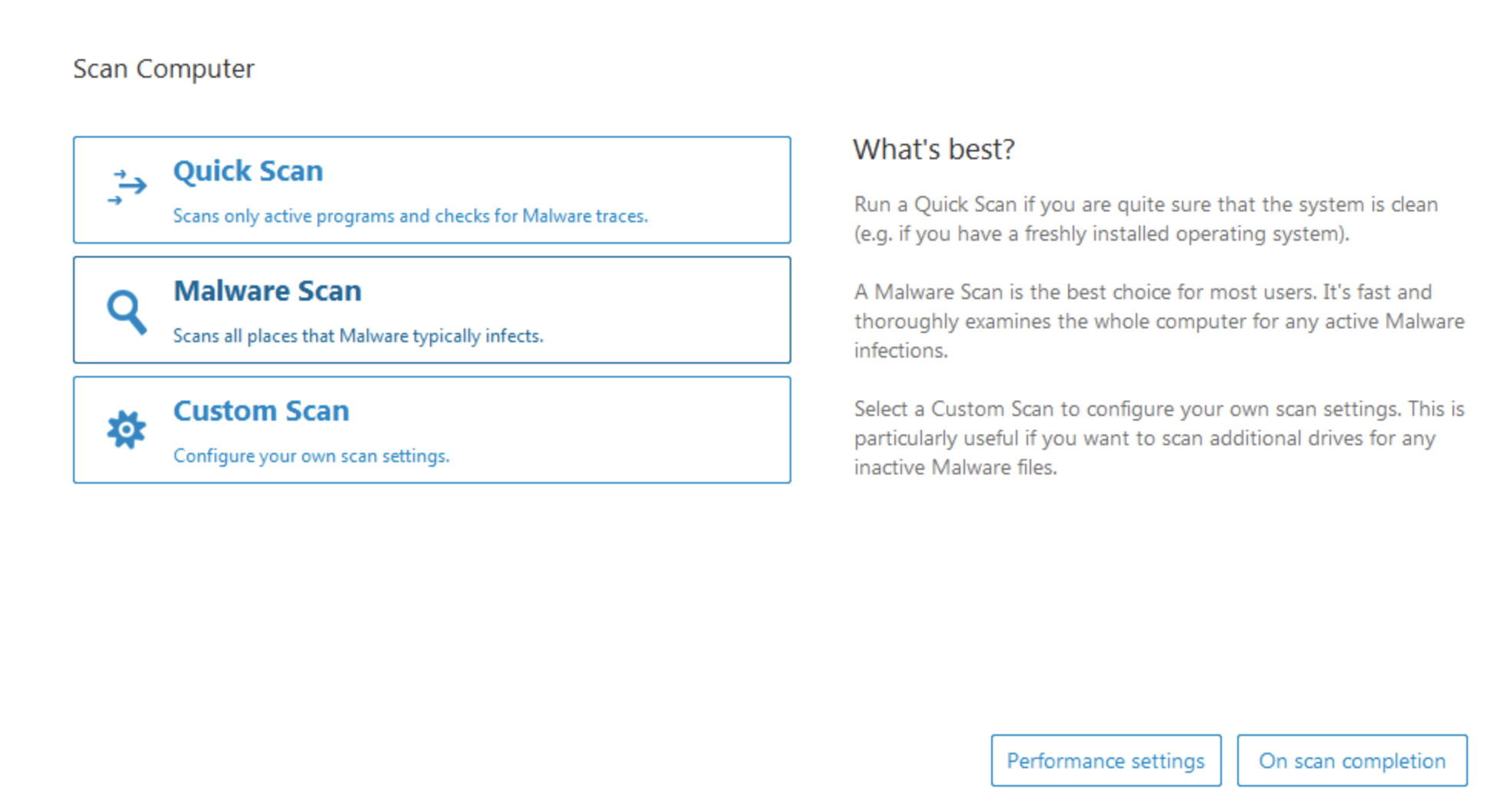 In my testing I can say that this software ran great; whether it was in the background or foreground running a scan. Compared to other apps I’ve tried, that is a big win in my book.

The variety of options it offers across the board is also a nice touch. Perform a quick, trace (look for traces of malware left behind), custom folder/file, deep scan and so much more.

Giving you a variety of ways to find whatever sort of malware you think may be affecting your system. Above all, as much as it’s great at detecting malware, it does an equal job protecting you from it. The active file guard and monitor is a great addition to the software and one that surprisingly many big name corporations don’t even offer.

Needless to say Emsisoft cares about the customer and protecting you from the harmful threats that lurk the internet.

Emsisoft pretty much nails the anti-malware game at its finest; offering an app that is not only useful and efficient but simple to navigate. While focusing on the most important aspect of the app protection and not overselling on random unnecessary features.

There is a 30-day free trial you can try out if you just want to see how Emsisoft anti malware does at protecting you.

From there you can purchase this software using our 50% Off special deal.

Get up to 3 PC’s covered for a year of Emsisoft for only $30 which comes out to nearly $10 per PC. An unbelievable deal! So definitely take advantage while time lasts.

If you need just one license for a year then you can get it for $20. With savings offers the more years you register for.

On top of that

If you’re seeking further protection there is an optional Emsisoft Internet Security package that includes their Firewall software and mobile package for Android devices.

All purchases have 30 days money-back guarantee; Emsisoft’s way of assuring you that their software would totally work smoothly.

In the end, when it comes to security there’s no real price you can put on that. In this growing digital age, our files inside the computer, become increasingly important to protect.

Apps like Emsisoft anit malware make it, not only easy, but efficient to protect our PC’s.

Whether you’re a tech savvy or not, this is one app you won’t have trouble wrapping your head around. A straightforward interface while packing tons of technology under the hood to keep you protected as you move along your daily computer usage. An app you simply setup, and almost forget about, does its job in protecting you and your computer while doing its best not being a burden to your system.

Magisto Review and Demo - Create Your Video Story in 3 Steps